Once the game arrived (release date courtesy of Amazon), I quickly discovered why so many people love the Mass Effect universe and characters, and the game itself. I was perhaps a little worried in the beginning about jumping into a sequel that is story heavy in continuing from the events of the first one without having played the original first. Luckily, Dark Horse Comics did a really good job of crafting an interactive comic book for BioWare that filled me in on the story and allowed me to make some of the key decisions from the first game to the point where I ultimately didn’t fill like I had missed out on too much, from a story perspective, from the first game. Although obviously a 30+ hour game can’t properly be brought down to a 12 minute comic, but its at least something and did do an adequate job.

After playing for a while and building your party up the true size and scope of Mass Effect 2 begins to take shape. This is a huge game and there’s a lot of stuff to do to suck time away from you. The PS3 version includes the DLC for the game already there which just adds even more stuff right out of the gate. There’s side missions, optional loyalty missions for each member of your team, and then of course the main story stuff. It’s an open-universe really and there’s a strong sense of freedom, even though the actual levels are corridors that are linear. You can mold your Commander Shepard into good or evil guy through your actions and choice of dialogue, which is immense. To see everything and every possible diversion would take several playthroughs, and I absolutely love that kind of depth in a game. 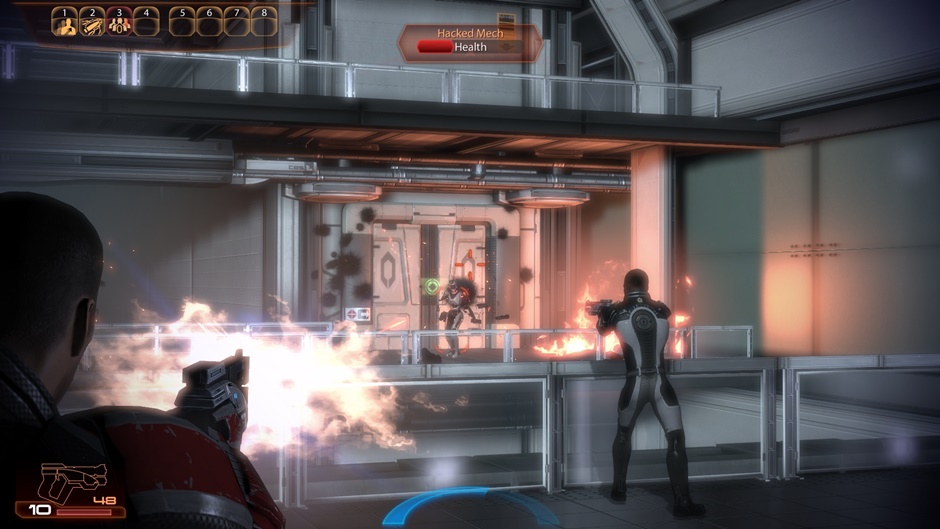 Mass Effect 2 is an RPG that plays just like a cover-based third person shooter action game. As a fan of  third person shooters, this was a great surprise. Some people may not like the change over to straight action in the combat, but I for one love it. As great as Knights of the Old Republic was, and many other real-time RPG’s, there’s always something infuriating to me about being right on an enemy and “missing” with my attack be it with a gun, sword, magic or whatever. Mass Effect 2 doesn’t feature that dice-rolling style nonsense; if you miss it’s because your aim was off. To that end, combat is really smooth in Mass Effect 2. The controls work great and the cover system is easy to handle; I never “got stuck” in cover like occasionally happens with other cover-based shooters.

There’s also an extensive upgrade system for your weapons, abilities, and armor for both your character and your party members (who you can give orders to) to really help customize your gaming experience. You’ll need to loot and mine for some upgrades and materials, and I actually enjoyed going to the planets and scanning them because I wanted the minerals for upgrades.

Mass Effect 2 is a story-driven game that is long enough and well developed enough to where you can easily come to care for your character and those he or she interacts with. Talking to your party members isn’t a chore; it’s genuinely something you care about doing especially if you’re trying to get the loyalty of every party member. The story itself surpasses anything George Lucas ever came up with (and I’m a Star Wars fan) and is really quite epic. When you factor in most your actions and choice of words has consequence, ultimately life or death for Shepard and the rest of the team, there’s always a sense of urgency. That urgency really picks up in the final mission: the suicide mission.

This point in the game is really unlike anything I had experienced in a video game before. The level of strategy and attention to detail in this final mission is breathtaking. Everyone has a role to play, not just you and the two people you bring with you. While you’re making your way through the final level, other teammates are doing assigned roles in a team effort to save the universe and humanity.

This is nerve-wracking stuff in a good way and its the pivotal moment in the game where you better have gotten to know your teammates. You get to send people off on the sub-missions, but the send someone without the necessary skill, or loyalty, and they could die. Other teammates may end up dying. Hell, YOU may end up dying. How you play throughout the game and the decisions you making heading into and during the final mission will impact the ending and will be pulled directly into Mass Effect 3.

In my first play through, as a good Shepard, I knew all about my crew and who had what abilities and what background. I had attained loyalty for everyone of them, and cared for each member. In the end my hard work payed off and everyone survived the suicide mission, but just one mistake could have impacted the ending I got and could have killed off one or two of my members which would have been devastating for my save file in preparation for Mass Effect 3. Few games have the kind of story and character development to bring about an actual caring for the characters. Mass Effect 2 does it exceptionally well to the point of brilliance.

In fact, Mass Effect 2 does most things exceptionally well. There’s even a very deep and well developed codex that provides detailed information on pretty much anything you’d want to know about the Mass Effect universe. This codex system just shows how well thought out everything is and how much detail and dedication everyone who works on the game has to the series.

As a game, there’s very little wrong with it. It’s actually as close to perfect as games can get. But there are some flaws. There’s issues with clipping, especially when it comes to the Firewalker pack of free DLC (which was already included with the PS3 version). In these missions you get to drive a vehicle called the Hammerhead, but often times you can get in spots where it completely disappears under the ground.

You’re not stuck and you didn’t actually go underground, it just falls completely through the texture. It was free DLC so it doesn’t impact things too much, but it just shouldn’t happen. Neither should the jagged edges that appear around characters during cutscenes.

Honestly though, those flaws are so minor that I would still give the game a 10 out of 10 IF not for the biggest fault I have with the game, and its one that I just can’t overlook or write off as minor. Keep in mind that this review is the for the Playstation 3 version released this January, and since I didn’t play the game for either PC or Xbox 360 I can’t say whether or not this issue is a problem on those platforms.

This game froze up and caused me to do a hard reset more than any other Playstation 3 game that I’ve played. Most games don’t cause freezing, and if it does happen its once or twice and simply a minor inconvenience. Mass Effect 2 froze up at least five to seven times during the course of my 30 hour play-through.

Not only do the hard resets take several minutes before you can get back in the game, but they also mean you’ll have to replay certain parts to get back where you were. Once or twice is fine, but five to seven is absolutely absurd.

Freezing issues aside, Mass Effect 2 is still an outstanding game in every way from graphics to gameplay. It’s an epic journey packed with some stellar action sequences, and some of the best character growth and choice ever put into a video game. The game never gets boring and has a lot of replay value to it. Regardless of your system of choice (of the three that its available on, obviously), Mass Effect 2 is a game that should proudly sit in your collection as it is an absolute must own.

Mass Effect 2 gets a four out of five: GREAT.