I didn’t purchase Zen Pinball when it was released for PS3; I just didn’t think pinball on a console would be all that fun. When Playstation Plus featured Marvel Pinball for free, I downloaded it and liked it so much that I ended up purchasing some of the DLC tables for it. I bought Captain America and Fantastic Four tables, but unfortunately Fantastic Four isn’t quite compatible with Zen Pinball 2 at the moment (so that’s one table you won’t be able to import for the time being). Captain America plays great on Zen Pinball 2, and while it has been a while since I played it before Zen Pinball 2’s release, it definitely looks a little better. 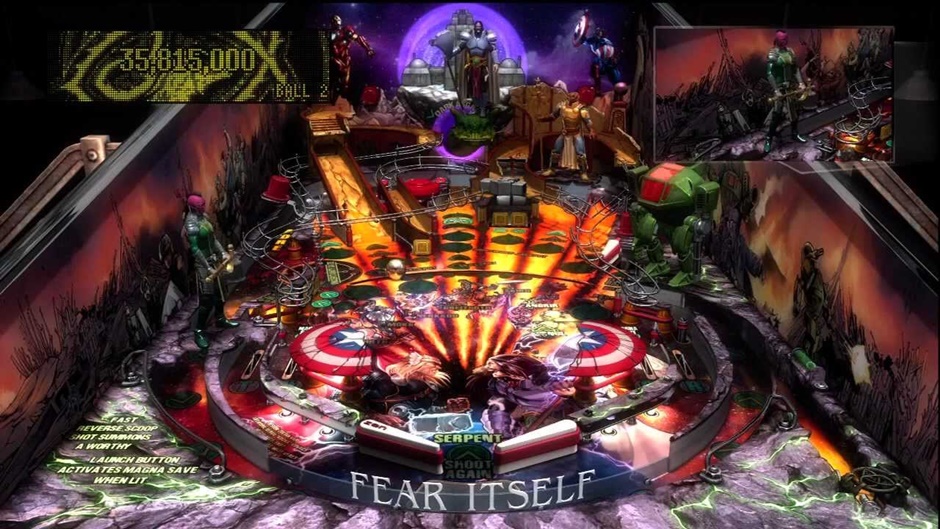 My review copy included five tables; the Avengers pack that came out earlier this Summer for Marvel Pinball and the brand new Plants vs. Zombies table. The Avengers pack includes four tables: Avengers, World War Hulk, Fear Itself, and The Infinity Gauntlet. It’ll run you for $10, and if you enjoyed Marvel Pinball but missed this pack and are just now getting back into pinball thanks to Zen Pinball 2 then you’ll definitely want to purchase the Avengers pack. I’m not a huge fan of the Fear Itself table, but the other three are a ton of fun.

The thing I love about all of the Zen pinball machines is how fantastical they are. Zen Studios takes full advantage of the platforms they work with, creating a pinball experience that simply couldn’t exist as a real pinball machine. Real pinball is great, and there’s a market for more realistic pinball on consoles like The Pinball Arcade which brings real tables to consoles, but it’s the fantastical approach on the Zen tables that make Zen Studios the pinnacle of console pinball. There’s so much stuff going on that it can be hard to keep up with, but that’s part of what makes these Zen pinball tables so much fun.

The only new table available now for Zen Pinball 2 is the Plants vs. Zombies machine. This table is developed by Zen Studios working with PopCap. The result is absolutely amazing pinball table that completely captures everything that makes Plants vs. Zombies so fun and charming. This table has quickly become my favorite console pinball table. Even if you’re not a pinball fan, but you do enjoy Plants vs. Zombies, this is a $3 table that you’d get a kick out of. It is the best pinball recreation of its source material that I’ve ever seen. The zombies that come walking towards you are the exact same zombies that know and love from the PopCap game.

Zen Pinball 2 itself, as a free pinball platform, gets a 10. What’s not to like about it? If you have Zen Pinball and/or Marvel Pinball, you’re getting a sweet free upgrade that brings everything under one roof with some added graphical and physics enhancements. If you don’t have any of pinball tables, well you’re free to download Zen Pinball 2 and try out a demo of every table. When you factor in high score leaderboards, online and offline multiplayer, and the fact that you can buy any pinball table and be able to play it on PS3 and PS Vita without having to buy the same table twice it really is a no brainer download for any Playstation pinball fan.

Zen Pinball 2 gets a four out of five: GREAT.