Samson and Delilah is a well-known Biblical tale from the Book of Judges. The tale of Samson isn’t long, and Delilah makes up only small (but important) portion of it. This movie, one of Cecil B. DeMille’s epics, is based on the tale of Samson in Judges, but only loosely. There are a lot of liberties taken here to stretch the brief tale into an over two hour movie. The biggest of course that Delilah was the sister of Samson’s Philistine wife and actually loved Samson and felt remorse for betraying him.

In that sense, DeMille managed to make Delilah (played by the lovely Hedy Lamarr) into a somewhat sympathetic character who herself was betrayed by her fellow Philistine’s after turning Samson over to them. That’s a pretty big liberty to take with a Biblical story as far as I’m concerned, but ultimately doesn’t change the fact that the movie itself is really quite good.

The plot, since it comes from the Bible, is probably known by at least half of you reading, but for the benefit of those who aren’t familiar with the story here’s what the movie is about.

Samson is a powerful (strength wise) Judge of the Israelites who is under Nazirite vows (one of the vows is to refrain from cutting the hair on your head). Despite having a perfectly fine Israelite woman wanting to marry him, Samson turns his attention to a blonde-haired Philistine beauty named Semadar. Of course the Philistine’s are ruling over the Israelite’s. Samson isn’t the only one after Semadar though, as she is also being pursued Ahtur, the Governor of Gaza.

Samson goes to visit Semadar, who is getting ready to go hunt a lion with Ahtur and some other Philistine soldiers. Naturally, Samson wants to go hunt the lion too, but he’s going to have to ride with Semadar’s sister Delilah. Samson and Delilah arrive at the location the lion is in first, and Samson wrestles the lion and kills it with his bare hands. Delilah is very impressed and pleased with Samson, and she wants him.

After being convinced of Samson’s strength, the Saran of Gaza gives Samson the hunter’s ring for killing the beast, but Samson says he’d rather take a Philistine bride instead. The Saran agrees, and Delilah is happy thinking Samson is going to choose her. Instead, Samson chooses Semadar, angering both Delilah and Ahtur in the process.

The wedding is set and some scheming goes on between Delilah and Ahtur. Samson has a riddle for 30 Philistine’s that if they can answer he will give each a garment, but if they can’t guess the answer they’ll each have to award him a garment. Ahtur threatens Semadar and makes her guilt Samson into giving her the answer, which she gives to Ahtur.

Samson is enraged, all hell seemingly breaks loose, and he storms out and steals 30 garments from Philistine’s and comes back. When he gets there, he finds out that Semadar’s father has given Semadar to Ahtur and that they have wed. Semadar’s father offers Delilah in her place, but Samson wants none of that. Delilah then tells Samson that it is all because of her plotting that this has happened, as she wants Samson. Then all hell really does break lose; Semadar and Semadar’s father are killing in an ensuing fight, which only angers Samson more so.

So, Samson and Delilah are both furious. Samson causes a lot of pain for the Philistine’s, and they respond by increasing taxes on and looting the Israelite’s. Samson allows himself to be bound by the Israelite’s and turned over the Philistine’s. They mock him, and eventually he calls out to God who answers with a lightning storm. Samson uses that as his cue to bust loose and go on a killing rampage. Using the jawbone of an ass, Samson kills between 100 and 1000 Philistine soldiers.

The Philistine’s have a meeting about what to do, and Delilah says she can capture Samson and find out the secret to his strength and hand him over to the Saran. In return, Delilah wants 1,100 silver pieces from each of the men at the council and the Saran’s promise that no blade touches Samson’s skin. The Saran and the council agree to the terms.

It’s here that it becomes apparent that Samson has all the brawn in the world but no brain to speak of. When he comes across Delilah, he shows some smarts by recognizing that she is there as bait from the Philistine’s to capture him. Indeed, Delilah tells him repeatedly that she is there to betray him. Even still, with Semadar now dead and with Samson having an unreasonable to desire to be with a Philistine woman, he falls for Delilah. She asks him three times what the secret to his strength is, and three times he gives a false answer. Delilah tests his answers by screaming “Samson, the Philistine’s are upon you!” and watching him snap the ropes that bind him.

Samson finally goes to tell her the truth, but Delilah doesn’t want to know. Instead, she wants to flee to Egypt with Samson and live happily ever after. Samson agrees. Low and behold, Miriam, the Israelite woman that loves Samson, and Saul, and Israelite kid, show up and inform Samson that the Philistine’s have killed his father and have his mother tied out and that she is calling out for him. Naturally, Samson wants to go bust some skulls. 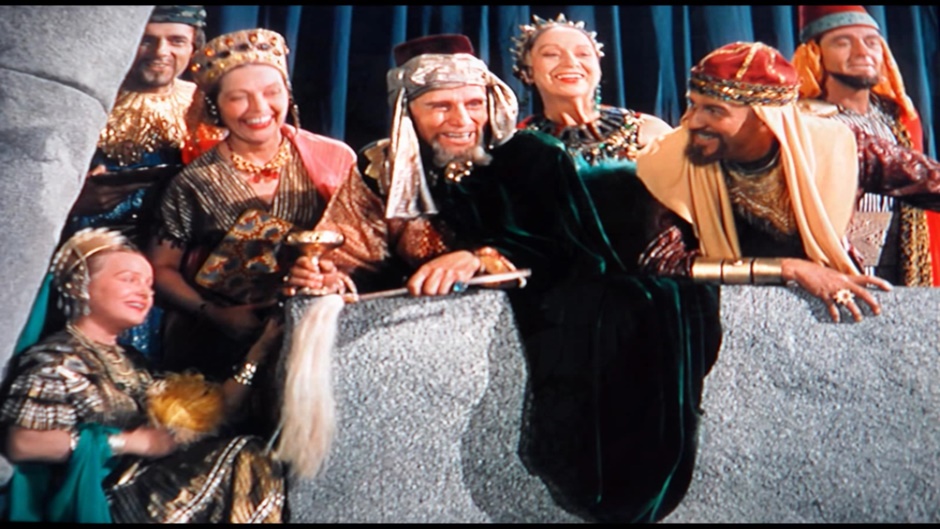 Delilah is once again angered that Samson is turning towards of another woman, and asks him to drink with her before heading out. She has poured something into his drink, and Samson figures that she has so he switches the cups from Delilah’s hand. Delilah isn’t dumb and figures that Samson would do that, so she was holding the tainted cup. Before this though, she asks Samson what the source of his strength is, and he told her of the Nazirite vows and how his head has never been shaved and that’s where his strength is. After drinking from the cup, Samson passes out, and Delilah gets to cutting.

The Philistine’s come in and binds Samson, and Delilah leaves. The Saran doesn’t kill Samson, in keeping his word to Delilah, but he scoots around it by using a hot blade to blind Samson. They take him in to Gaza to grind wheat and be mocked by the Philistine people. Delilah comes to see, and is devastated to see that Samson has been blinded and is being treated poorly. Later, she calls out to Samson’s God wanting forgiveness and for Samson to get his strength back. It’s been a while, so Samson’s hair does grow back out, and thus is strength does return.

Delilah goes to Samson again and wants to free him, and after a few minutes the two embrace and talk again of fleeing to Egypt and Delilah being his eyes. But when Delilah tells Samson what the Philistine’s are planning to do to him that day, he tells her he must stay.

So Samson is brought to the big temple of Dagon, and humiliated before the people. Delilah pretends that she wants to whip Samson, and ultimately leads him to the pillars of the temple so that he can feel them. Samson tells Delilah to get out of the temple, and she pretends too at first but ultimately does honor Samson’s wish. Samson then uses his strength to push the pillars off their foundation, bringing the temple down killing himself and most of the Philistine’s present.

The destruction of the temple was very good considering this movie was made in 1949; I mean it was some pretty impressive effects.

I think it is a pretty big assumption that Delilah ever loved Samson or felt remorse for what she did, so I admit that I probably would have liked the movie even more than I do had she not been presented as a somewhat sympathetic character. I suppose ultimately you can’t really blame Delilah for Samson’s fate, as his problem was his love of the women and breaking his religious promises to God, who he did ultimately return to.

This was the first movie starring Victor Mature and Hedy Lamarr that I’ve ever seen, and I liked the performances from both. Victor made a good Samson, and it was easy to buy him as a dumb brute with a weakness for women. From the movie and the liberties taken, Samson was an idiot for not marrying the Israelite woman Miriam, who was both very pretty and wholesome. Granted, Hedy Lamarr was quite gorgeous in the film, but Olive Deering’s Miriam was more of a complete package as far as I’m concerned.

This is also only the second Cecil B. DeMille movie that I’ve seen, and the first was another Biblical epic: The Ten Commandments. This one isn’t close to as epic and awesome as The Ten Commandments (but then how could it be?), but it’s still a really good movie that I enjoyed finally watching and would easily recommend to anyone. Infact, I may even pick up the DVD (hopefully a Blu-ray) when it’s released on March 12th.

If you haven’t seen this one yet, give it a go at your earliest convenience.

Samson and Delilah gets a four out of five: GREAT.