It’s somewhat of a miracle the Ryse in its current state exists at all when you truly think about it.  What was originally intended to be a Kinect title on the 360, had to be gutted and completely reconfigured to be a live action launch title for the XBOX One.  Truth be told I was pretty skeptical of the title at all prior to seeing some detailed gameplay videos that sold me at the 11th hour.  Still it had a hell of an obstacle to overcome in its development history as well as the fact that the programmers were admittedly new to the “hack and slash” action genre.  So what would the end result be?

As the title would imply the game takes place in Rome in a fictional storyline that takes historical liberties, as most games do, through the players control of a soldier named Marius.  Marius is shown to have two major loyalties, his family and his homeland of Rome.  As both are threatened the player will lead Marius through his quest of revenge against those who wrong him.  That’s about as basic as I can get without lingering into spoiler territory.

Obviously there are a few twists and turns along the way though to me it seemed the storyline takes more of a backseat in the earlier portions of the game than it does as the game progresses.  Though that is often the nature of these types of games anyway, players are more interested in the action than having an overly intricate storyline. 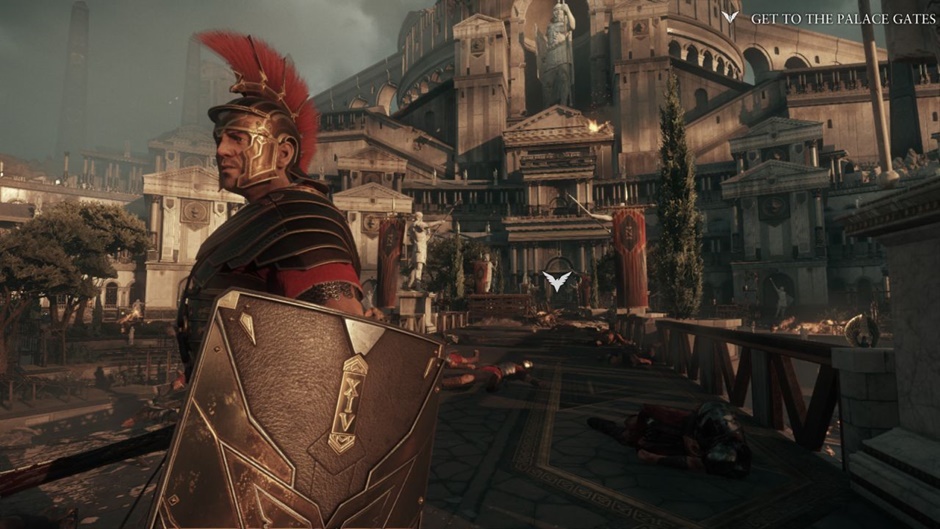 The gameplay of Ryse is dominated by mostly standard action oriented battles in which the player controls Marius as he fights off groups of soldiers and/or barbarians.  The closest thing I can think to compare it to would be a hybrid of the Batman Arkaham series and Assassin’s Creed series’ combat system.  It is this system that drives the vast majority of the gameplay.  There are some smaller sections in which you control an entire line of Roman soldiers as you hold position and work towards eliminating archers who are positioned for long range attacks against your army.  You also have small sections in which you control a crossbow torrent to take out larger groups of enemies.  Still I would say about 90% of the game’s combat is you individually taking on groups of enemies.

While I did make reference to the Arkham games and Assassin’s Creed games for the combat of Ryse, the game is not an open world title like those games.  The game is very linear and you are limited to the places in which you go.  Each section is meant specifically to progress the main story though you will find some collectables in various areas on your way to the next destination.  The best I can tell though the collectables aren’t meant to necessarily add to the replay factor but rather a means for completionists and achievement hunters to have additional things to shoot for.  In terms of gameplay the collectables don’t add anything new to the game or character.

Speaking of replay value, there isn’t a whole lot here.  As I said the collectables aren’t much incentive to play through again unless you want to get all the achievements since each collectable set (I believe there are 4) has an achievement tied to it.  Though if you do play on the hardest difficulty the color prompts that signify certain events such as executions and an unblockable attack are removed on top of the added difficulty of the enemies.

There was a bit of controversy prior to the game’s release as to whether the game was going to be predominately a series of quick time events.  These are limited to the execution moves you trigger optionally.  However, even though they are optional they are very much a helpful part of the game.  Performing these executions give you bonuses such as health generation, extra XP and additional focus for your character.

Ryse does feature microtransactions, something that people are split on in the gaming community.  My stance is simple, if you don’t want them, then don’t buy them.  In the case of Ryse I’m not really sure why you would.  That’s not a knock on the game itself but rather a knock against impatience.  Every thing you can buy can easily be unlocked via simply playing the game.  The additional executions and other various bonuses are bought either using Valor or Gold.  Gold is purchased with real money whereas Valor is earned through playing the game.  With the ease in which you earn Valor I again have to question why you would purchase Gold at all.

I do want to be clear that Ryse is a Mature rated title if you are someone out there looking to possibly pick the game up for a child.  For the most part the rating is due to the violence predominantly featured throughout game, including limbs being graphically cut off and throats being slit; both that happen very often.  Towards the end of the game there is also some partial nudity featuring dancing girls, which seemingly comes out of nowhere.

Note:  Ryse does feature online Multiplayer features but as of the time of this review I haven’t had a chance to check out those features.  Thus the review is on Ryse’s single player campaign alone. 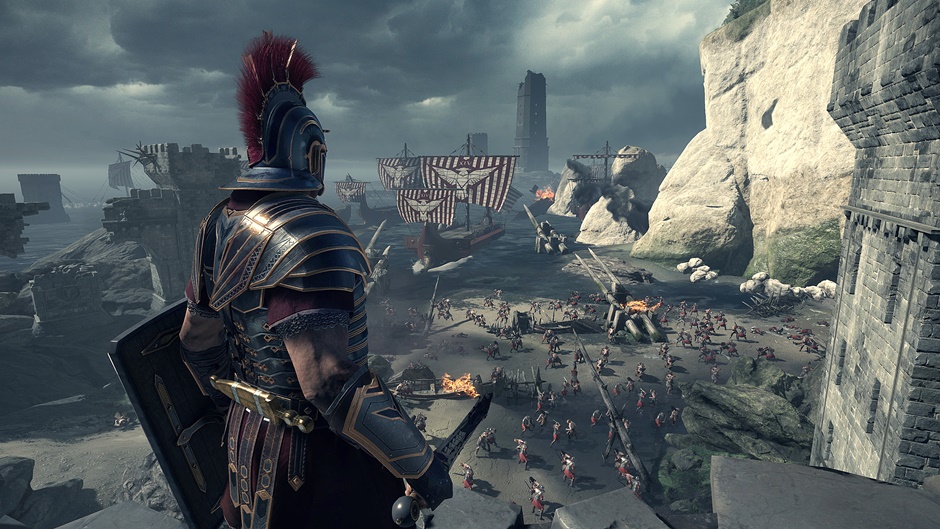 Ryse is the best looking launch title for either Next Gen system.  It really shows just how great Crytek is as making beautiful visuals and despite the game running at 900p it puts some titles that run at native 1080p to shame.  The look of the game is truly one of its greatest qualities.  A testament to the look of the game is that my wife actually asked whether I was watching a movie or a game and didn’t want to believe me when I said I was playing a game.  Whereas some games are great at having stunning visuals in cut scenes Crytek manages to maintain a high quality look throughout the entirety of the game’s duration.  This is in part to the in your face camera style that is used for the game that doesn’t allow for “parlor” tricks to hide visual defects.

It is however this style that brings my only gripe with the look to the forefront.  Character design.  I understand not having a ton of different character designs and in games such as this you can usually disguise it by having the armies of people have a uniform attire.  Case in point, you really don’t mind that the bulk of the roman soldiers outside of Marius look the same because they are disguised under their armor and helmets.  It’s the enemies that don’t have this luxury that have their flaws showcased.  The biggest offender is the “shirtless fat guy with a beard” barbarian.  There were times in the game where I would literally be fighting three of these guys simultaneously.   For a game with such great visuals it does take you out of the experience a bit.

The controls are fairly easy to adapt to, with the game choosing to make use of all of the controller’s button scheme.  The main four are assigned as follows:  A button is for blocking, B is for rolling, Y is for pushing, and X is for attacking.  Holding X or Y will give you heavy variations of the same command.  The two bumper buttons are used for running and focus; with LB handling the former and RB handling the latter.  Though not covered much in the game, focus allows you to slow down the gameplay to better string together high combos.  The two trigger buttons are used for aiming and firing much in the same vein as a first person shooter.

The executions that I mentioned before are triggered by different scenarios such as positioning and damage using the right trigger as a skull appears above the enemies head.  This triggers the color button prompts that tell you which button to push.  Timing the attack gives you higher rewards.  Though for some reason if you don’t care about the amount of rewards you get you can not push a button at all and the execution will still perform the animation fully.  This is probably the most questionable decision the game makes and could have really added additional challenge had the possibility to fail an execution been included.

There is also optional Kinect voice commands that can also be handled by holding down the LB button when the prompt pops up.  I have to say though that there is something satisfying about yelling “Fire Volley” or “Archers Cover Me” at your television even if everyone in your house things you are crazy.  For the record, yes I totally used an accent when shouting said commands.

I went back and forth with what the exact verdict for this game would be.  Truth be told I enjoyed Ryse a good deal and probably more than I should have.  Though the game had some missteps I still feel they did more right than they did wrong.  In fact if they are able to correct the few issues and make some minor changes I could see a potential sequel being a game of the year contender.  At the end of the day the shortness of the game’s campaign mixed with the lack of depth in your basic attacks I have to say the game is a Buy at a Bargain title.  Very much worth playing but it’s hard to justify the $60 price tag.  $35-$40 on the other hand, seems perfect.

Ryse: Son of Rome gets a three out of five: SATISFYING.

About THE MONKEY (14 Articles)

Famous for Being Unknown