This episode was main evented by a star-studded tag team match that pit Triple H and The Undertaker against Stone Cold Steve Austin and The Rock. It’s the night that saw the unforgettable merging of the Corporation and the Ministry of Darkness.

That was the pilot though, and the official launch of Smackdown as a weekly series wouldn’t happen until August 26th, so that’s the anniversary of the weekly version of Smackdown. WWE will celebrate this milestone for the blue brand on August 27th.

You can start the celebration a little early though, with the WWE Smackdown 20 Years and Counting book from DK and WWE Publishing.

If you enjoyed last year’s WWE RAW: The First 25 Years, then you’ll certainly enjoy this one as well. Jake Black, Jon Hill, and Dean Miller team up once more to take you on a walk down memory lane by looking back on the first 20 years of Smackdown. A true legend, and a huge part of Smackdown history, the phenom known as The Undertaker wrote the brief foreword for this outing.

Smackdown 20 Years and Counting follows the exact formula of RAW: The First 25 Years. It’s just shy of 200 pages, and each year (1999 through 2018) is covered in around eight pages or so. There’s a paragraph write up for most weeks, again focusing on one aspect of the show rather than serving as a run down of the entire show. 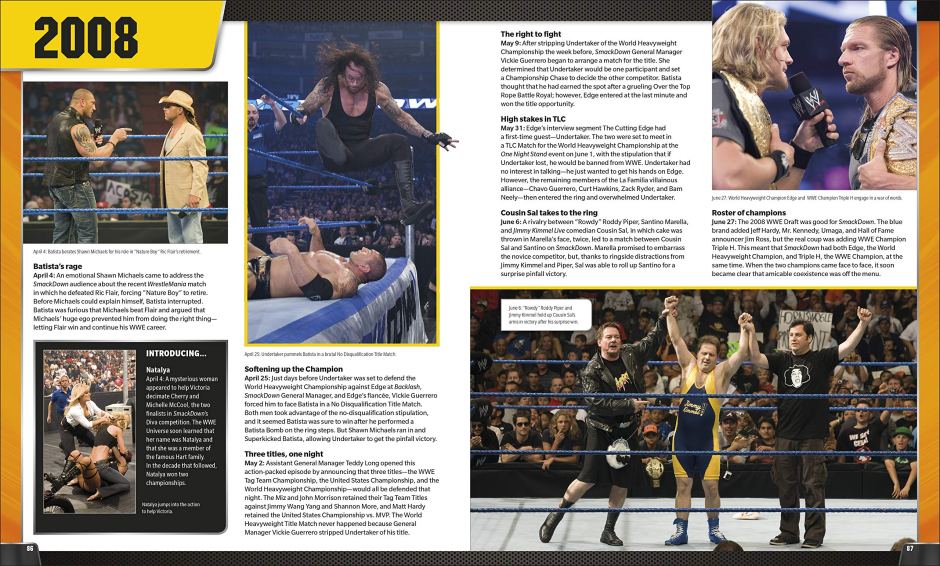 The book is packed with pictures and information boxes like “Elsewhere in WWE” that talks about stuff that was happening on RAW or PPV’s during the time, and “Introducing” which gives a little info on a talent who debuted during the month.

As always, the information presented here is top notch from cover to cover. DK always excels at presentation and presenting the highest quality around.

When I reviewed RAW: The First 25 Years last year, I had one complaint with it. That was that the book didn’t cover every episode or have the full results from every show. Again, I understand why that is, and once more won’t judge a book based on what I personally think it should contain. That’s such a nitpick complaint as is, and I know most folks don’t care to know that Dean Malenko beat Chyna on May 11, 2000. That’s just a little thing that I think could further elevate this type of book.

Much like its RAW counterpart, this book serves as the perfect companion piece for those fans who are, or will be, reliving Smackdown on WWE Network. For long time fans, it’s a great walk down memory lane, and there’s enough info and pictures to intrigue the newer fans to go back and look up some of this stuff.

As is usually the case with this WWE/DK collaborations, Smackdown 20 Years and Counting is absolutely a book that belongs on the shelf whether you like to collect them or are just a casual fan looking for a great read/companion piece.

WWE Smackdown 20 Years and Counting is available now wherever books are sold. The MSRP is $25, and as always, I recommend picking it up from Amazon for the great price of $16.50. It’s well worth every penny of that; this is a well written and beautiful hardcover book. Note that the Amazon link provided is an affiliate link, so if you click it and purchase the book you are also helping the site by simply using our referral link.

WWE Smackdown 20 Years and Counting gets a five out of five: EXCELLENT.

* A copy of this book was provided by the publisher for review.