How to Get Athrys’s Embrace

Athrys’s Embrace is the new exotic gauntlets for the Hunter.

It has the trait Skittering Stinger: Weighted Knife gains a second bounce. Rapid precision hits with your weapons grant Weighted Knife a significant damage bonus and the ability to stagger shielded combatants for a short time.

In order to get these gauntlets, you will need to complete either a Legend or Master Lost Sector solo on Europa or EDZ.

It has to be a Lost Sector that has Exotic Arms Armor listed as a possible reward. These Lost Sector’s rotate daily; there will be one Legend and one Master.

The exotic drop, which you have to be solo for, is a rare drop on Legend and a common drop on Master.

As you can see in the image below, when Concealed Void is either of the dailies, you have a chance of getting Athrys’s Embrace if you complete it on your Hunter. 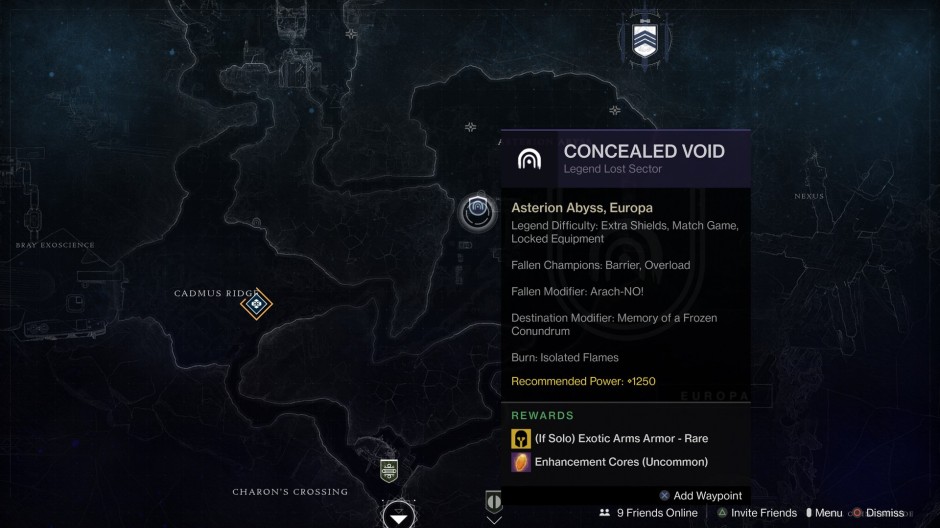 Since you have to complete it solo, make sure you are familiar with the basic Lost Sector and enemy type in it, and then examine the many modifiers that Legend and especially Master throw on it.

You will have Champions, so make sure you have mods from your Artifact to best handle them.

When you break the shield or overload or stagger them, swords are still really good to take down Champions efficiently.

As you are not guaranteed to get the new exotic, be prepared to run it multiple times. That’s why I wouldn’t recommend attempting it until you are close to the Recommended Power. You don’t want to spend an hour slogging through it and then not get the drop.

If you do get one to drop but don’t like the roll, you can complete it as many times in a day as you want to try and farm. . (UPDATE: It was brought to my attention on Twitter that the new exotic is not guaranteed to be the first exotic drop you get, meaning you’re going to have to be super lucky.)

If the Lost Sector list Exotic Helmet or Exotic Legs as the potential reward, then you obviously can’t get Athrys’s Embrace from them.