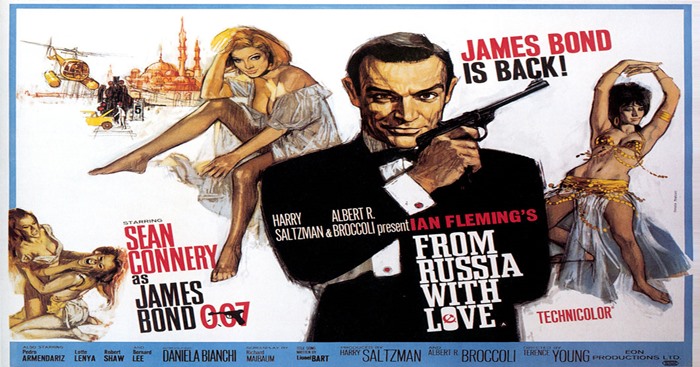 Hello everyone and welcome to the second in my series of reviews covering the James Bond film franchise. When last we left him, our hero was snug as a bug in a rug, in a boat with the lovely Honey Ryder drifting away the hours in the steamy Jamaican seas. All this of course after successfully foiling villainous S.P.E.C.T.R.E agent Dr No’s dastardly scheme for world domination and decimating his entire underground operation to boot. A tough day’s work for anyone no doubt, and one that might require a bit of rest and relaxation afterwards indeed; which is why we’re not surprised to find James at the beginning of this movie sunk down in the bottom of another boat with one Sylvia Trench, yes the same gorgeous Sylvia Trench from the early scenes of Dr. No that Bond was about to copulate with before being sent out to his mission in that particular film. As it will be from this point on, James Bond will leave no stone unturned and no beautiful lady unloved, aside from the always pining and flirtatious Moneypenney that is for some reason. It’s not all fun in the sun though, as soon we learn the diabolical S.P.E.C.T.R.E organisation has already devised a plan to get their revenge on Mr. Bond by exploiting his most prominent weakness… those aforementioned women. And for this mission they have chosen a most desirable Russian beauty in Tatiana Romanova, or as Bond will refer to her, simply ‘Tanya’…

She will also be the unknowing pawn in S.P.E.C.T.R.E’s plot to steal a super sensitive secret stealing cipher encryption device called the ‘Lektor’. She thinks she is on a mission for Mother Russia, but unbeknownst to her, Rosa Klebb, one of her superiors in S.M.E.R.S.H (the old Soviet counter intelligence agency later to be replaced by the KGB) has defected to S.P.E.C.T.R.E and everyone besides a few people in the very top brass are naturally kept in the dark about this highly embarrassing international affair. The mastermind behind the plan is a genius chess player named Kronsteen who answers directly to the chief executive officer of S.P.E.C.T.R.E, one Ernst Stavro Blofeld, known by his code name in the organization simply as ‘Number One’. With a few exceptions Blofeld will be the main source of irritation and consternation for James Bond for the next half dozen or so pictures. It will be a few more films before we are allowed to see his face, so for now we are left with the iconic image later parodied in the Austin Power’s movies, of the mad villain sitting in his padded chair, with his hand slowly running over his fluffy white cat as it purrs ominously into the camera lens

So, to wrap up this summary, S.P.E.C.T.R.E sends Tanya down to Istanbul to pose as a defector, offering the British Secret Service the Lektor in exchange for her safe transport to England, and the hand in marriage of one Mr. Bond…. James Bond that is. Along with her S.P.E.C.T.R.E has also sent one of their most promising and talented young recruits, a blond haired Soviet assassin named Red Grant, to find and dispose of James Bond in what Blofeld instructs to be a ‘most unpleasant’ manner. This sets the scene for all the various adventures that are to follow, and once again, after being debriefed by M, the head of S.I.S, and the customary flirting with Moneypenney, Bond will be flown off to Istanbul for an assignment that is right up his alley. All he has to do is find the girl, spend a few days ‘getting to know her’ (wink wink, nudge nudge), grab the Lektor and then he’s home free.

James Bond’s sole allie in this twisting saga of lies and lead will be Kerim Bey, a powerful and influential man with many sons, who resides in Istanbul and serves as the Station Chief of British Intelligence there. Both he and everyone else in this movie believes the set up to be an obvious trap, but as Kronsteen predicted earlier, instead of being scared away, the British, and most importantly, Mr. Bond view this trap as a challenge… and in any event, this Lektor device is far too valuable to let any opportunity to grab it slip through their fingers. So with that all set up now, the questions are, will Bond be able to deliver the Lektor? Will he be able to win over the loyalty of the lovely Ms. Romanova or will she betray him to the Russians or even unknowingly to S.P.E.C.T.R.E? Will Bond be able to handle this vicious new agent assigned to terminate him?

I won’t spoil the details for you, but what I can tell you is that this is without question one of my absolute most beloved Bond films of all time. For starters, the majority of the action takes place in Istanbul, a beautiful location for a Bond film. The bad guys in this film are among the best in the series, from the Ivan Drago like Red Grant, to Rosa Klebb and her infamous shoe-blade contraption, and of course, the infamous Blofeld, a genius villain with so many schemes, plays, and plots to taker over the world that one wonders if he somewhere has a playbook filled with the same kind of notes that a seasoned football coach would possess. Bottom line, this movie is flat out fun from beginning to end. From the Istanbul scenes, to the legendary scenes aboard the passenger train, all the way to the end, you’ll have to fight the smile off your face throughout the whole film.

Along with being a classic among classics, From Russia With Love also marks the movie debut of the beloved character known as ‘Q’… the miserly yet lovable old grandfather figure played incomparably by Desmond Llewelyn to whom Bond is indebted to for all his various gadgets throughout the years, whether they be jacked up cars with machine guns and rocket launchers attached to them, or a wrist watch with a laser beam shooting out of it, for the next thirty years following this film, without exception almost, Q’s gadget scenes would come to be one of the most looked forward to parts of any Bond film. And though Bonds came and went, Q remained the same, a testament to both the actor and the character created for him. And this film gets us off to a flying start, as here Bond is equipped with a really nifty little briefcase, with a collapsible sniper rifle, pop out throwing knife and an exploding gas cartridge in case someone besides him decides to go through his luggage. He will no doubt find a use for all of that later on in the film, as he winds through the ancient underground sections of Istanbul in a wooden boat, or as he winds across Europe in a fast moving passenger train.

I could go on and on and on about all the classic set ups and scenes in this movie, but that would be pointless I’m afraid. The bottom line is this, if you’re only going to see one James Bond film your entire life, make it From Russia With Love… This is the James Bond movie on which all later James Bond movies would be modeled after. I say that because of a quote I’m reminded of by famed Bond producer Michael G. Wilson… who quipped “We always start out trying to make another From Russia with Love and end up with another Thunderball.” Not that there’s anything wrong with Thunderball, but comparing that film to this one is like comparing the Mona Lisa to a splatter painting.

See it for the scores of hot and scantily clad women, see it for the endless series of great action and suspense scenes, but most of all, see it to catch a glimpse of prime vintage Sean Connery, in his absolute devilish Double O’ Seven best, defeating the bad guys, wooing the women, and enjoying his martinis, shaken, not stirred of course.. So please forgive me if this sounds more like a sales pitch than a movie review as it is impossible for me to be objective here. This is one of the very few ‘perfect’ Bond films.

Everything here is as it should be, from the villains, to the actor playing Bond himself, to the Bond girls, the Bond gadgets, you name it, all woven together by a plot full of twists and turns for Bond to weave through. So with all that said, I give it the full five star classic rating and recommendation with no hesitation whatsoever. This is a movie to be treasured and locked away in a safe vault and watched and rewatched until the disc melts away inside your DVD player, I say. Thanks for reading, and though we have a hard one to top from this week, next week may be even better as James Bond returns in the legendary classic film known as ‘Goldfinger’… See you then.

From Russia With Love gets a five out of five: EXCELLENT.

2 Comments on From Russia With Love Review