Dungeon Twister is a French board game created by Christophe Boelinger. I haven’t played the board game, as it really isn’t my kind of board game (that and no one I know would play it). My experience with board games are with the simple variety; Monolopy, Sorry, Clue, Payday, etc. So my only knowledge of Dungeon Twister comes from this newly released PSN port of the board game.

The game is sort of a mixed bag; there’s an almost equal amounts of likes and dislikes here. For starters, the game has a lot of rules and concepts, and to understand all of these things you’ll want to play through the game’s 20 tutorial missions. Each mission introduces a new concept and features a few objectives that you must complete to win. Obviously new players need to be eased into the game and the tutorial missions generally do a good job at introducing players to the complexity of the game, but at the same time some of these are too long and too boring.

Unless you’re a huge fan of the actual board game, boredom is definitely something you’re going to eventually experience with this game. There’s enjoyment here in short bursts, but if you’re playing a full advanced game then you’re going to be bored. Each player gets three minutes to complete their turn. That’s three minutes, potentially, of sitting there doing absolutely nothing but watching your opponent move around (and sometimes the AI will make absolutely stupid moves). 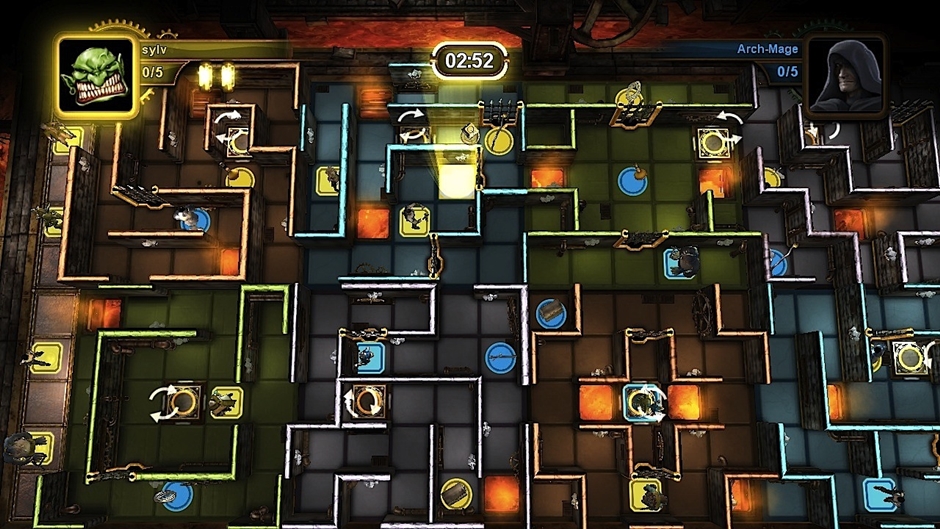 It’s not as simple as rolling some dice and picking a character to move how many spaces you rolled. Instead, you have Action Points dictated by some cards (two through five). If you play an Action Card of say five, then that means you get to do five things. Characters can move more than one space per AP though. For example, the Thief can move five spaces per AP. So Assuming you have a clear path, you lay down a 5 AP card and the Thief can move 25 spaces (on the small board, I saw the AI do this to score with their Thief in one go). There are even two potions on the board that you can grab and drink (doing so cost an action point) that will give you four additional action points to use only on the character who drunk the potion.

The game features two teams of eight characters battling it out to see who can score 5 victory points first. Each character has a unique ability; the Cleric can heal wounded characters, the Warrior can break portcullis and he’s good for combat too, the Goblin will score two victory points if you can get him out of the dungeon, the Wizard can launch a fireball at an enemy (if he has the wand) and fly over traps and enemies, the Wall Walker can walk through walls, the Mekanork has more options to rotate rooms than other characters, the Thief is the most mobile and can run over traps and open and close portcullis, and finally the Troll can regenerate if wounded and while slow is really best for combat.

As you can see, each character has an ability that makes them useful in accomplishing the five victory point goal. You score points by either having a character escape the dungeon (One point per escape, except for the Goblin who scores two), or by attacking/killing an enemy player (one point for killing an enemy). Combat is pretty basic. Each character has an attack/defend number which can be modified by using a Combat Card (+0 through +6). If you win a battle (which is determined by whoever has the highest number) then you’ll wound the opposing character. A wounded character can not move and has a base defense set at 0. Odds are, unless you have a Cleric close (or a Thief to quickly pick up the wounded character and carry him to the Cleric), the wounded character is probably going to die on the next turn.

Sprinkled around the board are two of several different items that all have uses. There’s the aforementioned speed potion that grants more AP, there’s a sword that gives a combat attacking bonus, a suit of armor that gives a combat defense bonus, a rope that’s used to lay over traps allowing safe passage over them (otherwise you have to jump, which cost an AP), wands that allow the Wizard to shoot fireballs, and there are also devices that allow you to rotate a room in various directions. Twisting the dungeon has a lot of strategic value and you’ll want to be mindful of it. By twisting a room, you can open up new routes, create easy access to an item, and block off enemies. 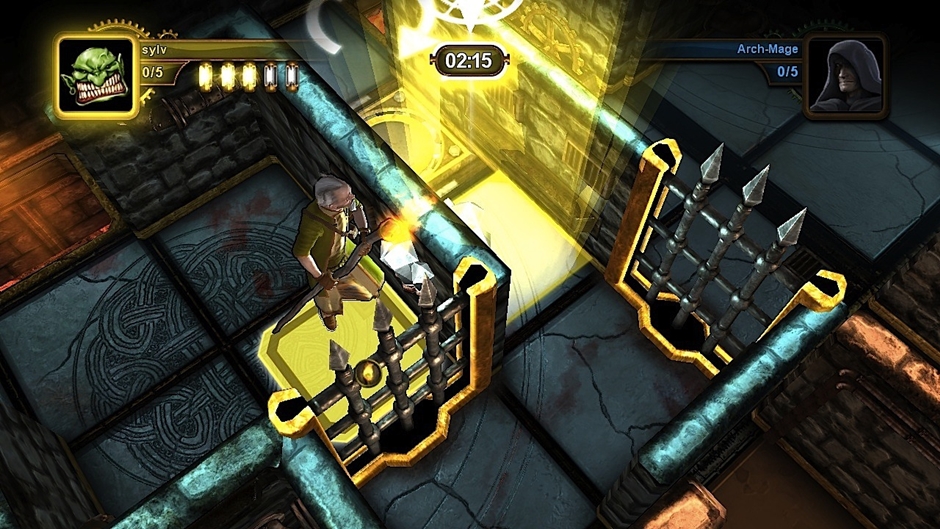 One of the biggest things the game has going for it is that it is hugely focused on strategy (and without naming names of other reviewers, there are plenty of reasons why you wouldn’t always go with the highest action point card when you have the chance). Playing with a squarely offensive mind probably won’t take you very far; you can’t just be all about trying to get your guys out of the dungeon. You’re going to need to play smart and anticipate where your opponents are trying to go and what they’re trying to do. Utilize the twisting feature to your advantage to trap them, block exit points with stronger characters, and don’t be afraid to have your guys travel in pairs. If you’re really smart, you’ll the see strategic value for keeping the Thief on the board and not immediately rush to try and get her out of the dungeon.

The strategy part definitely makes the game more enjoyable, but there’s just no getting past the fact that unless you like the actual board game (or these kinds of games in general), the game will get boring real fast if you’re playing an advanced game on a big board or online against someone else, simply because it can take quite a while to finish a game. This is a game that is fun in short bursts, quick simple games on small to medium sized boards.

Gameplay wise, it is what you’d expect. It’s top-down with a good look at the entire board, and you can zoom all the way down to get a nice look at the characters and the details. Graphically, the game looks good enough. You’re not going to be wowed here, but then again why would you expect too? This is a $10 download of a board game, it looks more than good enough.There’s even some fairly humorous dance animations for each character when they score by leaving the dungeon (and even some during combat).

Fans of the actual board game (or strategy board games in general) will likely really enjoy this title since it’ll allow you to play the game, on various skill levels, against either a competent AI or online against another human player, making it easy to get your complicated board gaming on while sitting on your couch or bed or wherever you sit when your play games.

This is probably more for the dedicated people, most like me who aren’t familiar with the actual board game or don’t enjoy real board games like this will probably find it enjoyable at times but boring in longer affairs. If you’re casually interested in it, do download the demo and take it for a spin. If you like it, it’s only $10 and there is a ton of replay value here if you enjoy it.

It definitely isn’t for everyone though, and the steep learning curve introduced in the training missions may be a turn off to some gamers.

Dungeon Twister gets a two out of five: FORGETTABLE.

* A copy of this game was provided by the publisher for review.