WARNING: Full spoilers for the episode below.

The actions of Spartacus’ band of rebels last week made it hard to like them. They continued down that path in this week’s episode, which I hoped wouldn’t be the case for an episode titled “Men of Honor.” There’s of course a certain understanding as to why the former slaves hold such disdain and hatred for the Romans, but that doesn’t make their actions acceptable.

On this episode, the slave army continued to treat their Roman prisoners/slaves poorly. Crixus got in on the act by forcing two Roman men to have gladiatorial contest for a little piece of bread. Crixus has been shown to be savage like in the past, but as a leader for the group you would hope he would be against such course. Gannicus, though he didn’t stop it, did not seem pleased by what was happening.

Spartacus, while definitely not a saint, continues to try and be an honorable man and wants the Romans treated fairly and fed. Spartacus and Gannicus remain the two worth rooting for, as they at least appear somewhat honorable. The rest of the crew though really do nothing for me. 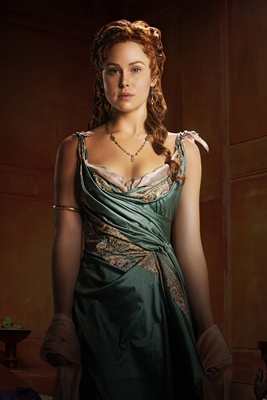 Anna Hutchison as the Roman, Laeta.

The character I really disliked this week was Naevia, who started crap with the Roman Attius (the Roman who helped Spartacus capture the city) and ultimately killed him (and rather brutally at that). She of course accused him of aiding Roman’s, but there was no evidence of that and indeed such a notion wouldn’t even make sense. Naevia also cut the hand of the victorious Roman from the contest when he was reaching for the bread (she claimed he was reaching for the sword). She recounted a horrible rape story to Crixus about how a Roman who appeared nice brutally raped her one night. It’s easy to be sympathetic to her, after all she has been through a lot, but it appears now she thinks she should be able to kill or injure any Roman man she pleases because of it.

Speaking of Naevia, I’m really hoping they kill her off in the next episode. Actually, I was hoping Attius was going to do it in this one during his fight with her. It’s not because I dislike Cynthia (she’s doing a fine job as a more vicious Naevia), but rather because there’s now only seven episodes left. Historically, Crixus and Spartacus separated in went in different directions. Crixus, supposedly, then went on a rampage of killing, looting, and raping before finally dying in battle. I’d like to see this happen sooner rather than later, and I don’t see it happening while he’s still with Naevia. So die already Naevia.

This episode was really all about Spartacus continuing to try and manage the logistics of his army and their need for food. He ends up striking a trade agreement with a group of pirates. As such, this was really a slow episode until the final ten minutes or so where things really picked up in a big way.

You think the pirates are going to betray Spartacus on the beach, but they didn’t. Instead, young Tiberius Crassus foolishly disobeys his father’s commands (and Marcus wasn’t on the show this week, sadly) and launches an attack on Spartacus and the pirates on the beach. Tiberius actually did pretty well in battle, even managing to get some kills. Of course his men were no match for the Spartacus, Gannicus, Crixus, Agron, and the others (plus the pirates). And just when you thought the tide might turn when the Roman reinforcements arrive, the pirate ships start raining flaming ball bombs down on them. Tiberius ends up getting quite injured and carried off, and Spartacus and the pirates are able to celebrate their victory.

Like I said, the show was really quite slow until the battle broke out. It was a good episode, but the worst of the season so far (and would have been worse had the battle at the end not been so good). I do like the story with Spartacus and Laeta (the Roman woman whose prominent husband Spartacus killed last week right in front of her). Of course that could just be because Anna Hutchison (Laeta) is gorgeous and the more she’s on the screen the more I like it.

Overall “Men of Honor” is a good, but slow, episode. I ended up missing Crassus… such a great character. At least he’ll be back on the next episode, which sadly isn’t until February 22nd.

Spartacus: War of the Damned – “Men of Honor” gets a three out of five: GOOD.