The Tomb Raider reboot of 2013 was my dark horse game of the year, as it was for many other people. It was impressive and it struck a nice balance on gameplay and challenges that drew in many new fans to the series, including myself.

I had always respected this series and I had tried out several of the earlier games, but the twitch gameplay and some other aspects were extremely frustrating.

Now comes the highly anticipated sequel to the reboot and I can guarantee you this is a game that people will be remembering at the end of 2016.

I don’t know if I can call it the dark horse of the year again, since expectations were higher all the way around for this one whereas its predecessor came out almost under the radar for a big name title. 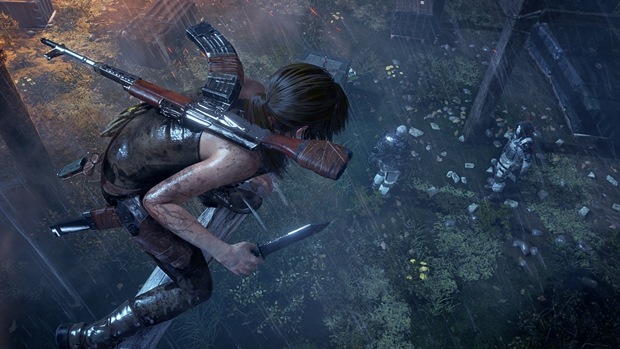 I was pleasantly amazed the PC version came out as quickly as did following the console version, and in this polished of form. All the graphics options PC gamers look for are there and your graphics cards will be challenged especially when you start hitting SMAA and especially SSAA options.

Lara’s “real hair” graphic options are also performance taxers but to not to an absurd degree, and I personally think it’s worth it if you can run it. Her hair look as real and natural as anything I’ve seen in a videogame or other animated product with this feature turned on.

Facial expressions are very natural and well done for CGI and  the diverse game world begs to be explored. I was very impressed with high resolution textures on everything from ice to foliage to equipment, some stunning looking water, and just a commendable attention to detail in every locale.

This is no quickie console port but this is no surprise coming from Nixxess who has been nothing but gold on PC versions of multiplatform games.

Characters and NPCs are well realized and emote especially well in CGI cutscenes but even outside of them.

The game’s art direction is masterful from top to bottom. Often times I have found myself stopping and just taking it all in whether it’s some of the most exotic hidden tomb locations or simply going out and about in a given area.

This game definitely merits the hefty hardcover artbook that I purchased immediately after I spent a little time with this. I will be surprised if this doesn’t get at least considered for art design and related awards at years end.

As has become a tradition of sorts there are a variety of “Lara death” animations that are sure to make your cringe and shake your head when you make a mistake. 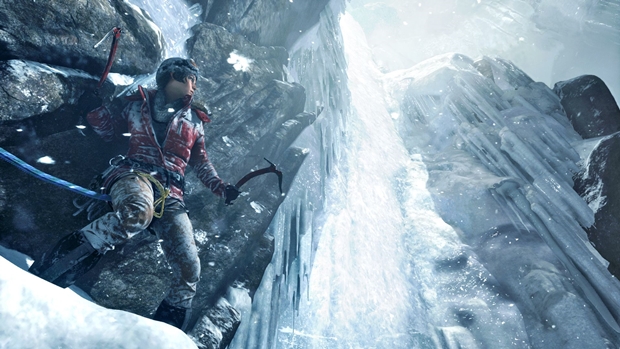 Some nice, cinematic music with appropriate flavors as dictated by the varying locales from composer Bobby Tauhori who I was not familiar with prior to this release but will be a name I remember from here on out.

The gameworld has excellent ambiance and sound design ranging from the varying sounds of nature and creatures all the way through to human activity and military and technology.

Weapon and gun sounds are satisfying and I won’t be surprised if this game gets some sound design awards at the end of the year. The voice acting is excellent.

A high caliber, compelling, and fun Indiana Jones flavored romp that takes Lara on a journey to ultimately vindicate her late father.

That one sentence does this no justice for the well crafted narrative that has everything from the aforementioned Indiana Jones elements, religious zealotry, quest for potential immortality, love, betrayal, sacrifice, absolution, and everything else you would want to see in a good story.

Most people will not feel like skipping the cutscenes. Lara ends up in a sea of adventure…or is that misadventure…trying to finish up her late father’s work and vindicate his legacy in the process.

Let me get this out of the way: There are occasional Quick Time Event sequences throughout this game but they are brief, evenly spread out, and most people will have no problems with them. In the 2013 reboot, the prologue had a disturbing amount of QTEs and that mistake was not repeated.

The most rabid QTE haters on the planet will not have any problems with the few instances and how they are handled in this game. Don’t worry about it.

Tomb puzzles and challenges are well thought out and will occasionally frustrate but that’s the point. I didn’t find the puzzles over the top but some of them will definitely force many repeats, some frustration, and yes probably a few peaks at YouTube.

Lara earns a rather impressive plethora of weapons and abilities as the game rolls on in satisfying role playing game fashion.

I found myself having a hard time on occasion deciding which weapon I wanted to use although her bow and arrows really evolve into something special so I suspect many people will find themselves using these the most but don’t miss out on some of her other nifty weapons and gadgets as well.

PC gamers will have no problems with the default mouse and keyboard set up. You can remap keys and make other adjustments otherwise plug in your favorite controller of choice and be on your merry way. I salute any game that implements both of these well and there really should never be any exceptions.

As in the previous game you do access campsites that allow for some convenient fast travel as you will be backtracking all over the place to unlock things and access areas you couldn’t before once you have earned new gadgets to access said areas.

Exploring is the ultimate thrust of this title and it performs that brilliantly.

Gender notwithstanding, this game scratches that Indiana Jones itch in a big way and I think the future is very bright for this series. I felt that way coming off the reboot and I feel even  more strongly that way now.

A few quibbles on gameplay balance coming out of 2013 were largely addressed in this game and I think they have come close to the sweet spot of satisfying the hardcore old time Tomb Raider fans and the newer fans like myself.

This game deserves all the success it gets and I will be eager for whenever the next installment in the series is.

In some ways I could join other people in making the argument for the term “masterpiece” because of how some of  this comes together in a complete package.

This is some impressive, high quality entertainment on any medium and easily shows up most of Hollywood’s output.

At Gamescom 2015 it was leaked that a sequel to this game was already being planned which is great news as far as I’m concerned.

The future is extremely bright for this series. Long live Lara Croft!

I am not clear as to why the PS4 version of this game is so far out as of this writing and I hope it isn’t just because of some silly “exclusivity window.” I hope that this long delay gets reconsidered like the PC version’s pleasant arrival was.

PS4 gamers should make this game a priority when the time comes as gaming tastes dictate.

Rise of the Tomb Raider gets a four out of five: GREAT.

2 Comments on Review: Rise of The Tomb Raider