Guardians, This Week At Bungie has dropped for September 17th, and the weekly update details some much needed (and long asked for) changes coming your Ghost when Beyond Light hits on November 10th.

Here’s what Designer Mina Jasinski had to say about customizing your little light this November:

Ghosts have always been important partners to our Guardians in the Destiny universe, but they haven’t received any meaningful updates in quite some time.

To allow Ghosts to truly shine as the useful and interesting companions we’d like them to be, we decided it was time to give them a bit of an overhaul.

In Destiny 2: Beyond Light, Ghosts have received a system update which shares some functionality to what was done with armor in Shadowkeep. Here’s a brief outline of what to expect:

One of our goals with this update was to separate visuals from functionality. We wanted any Ghost Shell to be viable and still have access to highly useful mods, regardless of tier or source.

You’ll be able to select your favorite Ghost Shell based on appearance without any detriment to your experience. Whether you purchase a Ghost Shell from Eververse, earn it from the newest raid or pull an old favorite out of Collections, your Ghost will have access to all the same mods across your account. From there you can increase energy levels on your favorite Ghost Shells and set each of them up with different mod combinations of your choosing.

As mentioned above, Ghosts will now have access to a total of four mod slots, each with their own unique mod selection. There will be an Experience mod slot, a Tracking mod slot, an Economic mod slot, and an Activity mod slot; the last of which is unlocked when the Ghost is Masterworked at 10 energy. You’ll be able to mix and match mods from these categories however you like, with respect to energy limits. Mod slots each have a selection of mods that can be combined to fit your playstyle. For example, a Crucible-focused player who wants to grind out materials and earn XP towards their Seasonal rewards track might choose Guiding Light, Meager Glimmer Booster, and Lesser Core Harvest (Crucible). There are a variety of combinations that can be set up on different Ghosts to suit whatever goals you might be chasing at the time!

For those wondering what will happen to the old Ghost perks, most have been brought forward largely unchanged as default unlocked mods. In some cases, such as the destination-specific material or cache trackers, those mods have been transformed into globally effective, non-destination-specific versions of themselves for better utility. Energy costs for those mods now reflect the increased flexibility and the mods must be earned from various vendor engrams. Kill Tracker and Leviathan Boss Kill perks will remain intrinsic only on their specific Ghost Shells. Even with these changes you’ll still be able to build most of the popular Exotic perk combinations that were available previously such as Guiding Light and Treasure Hunter, along with a plethora of new combinations!

We hope that these changes allow you to interact with your Ghost more meaningfully and help you to set up a variety of Ghost Shells that suit you in various playstyles and activities. 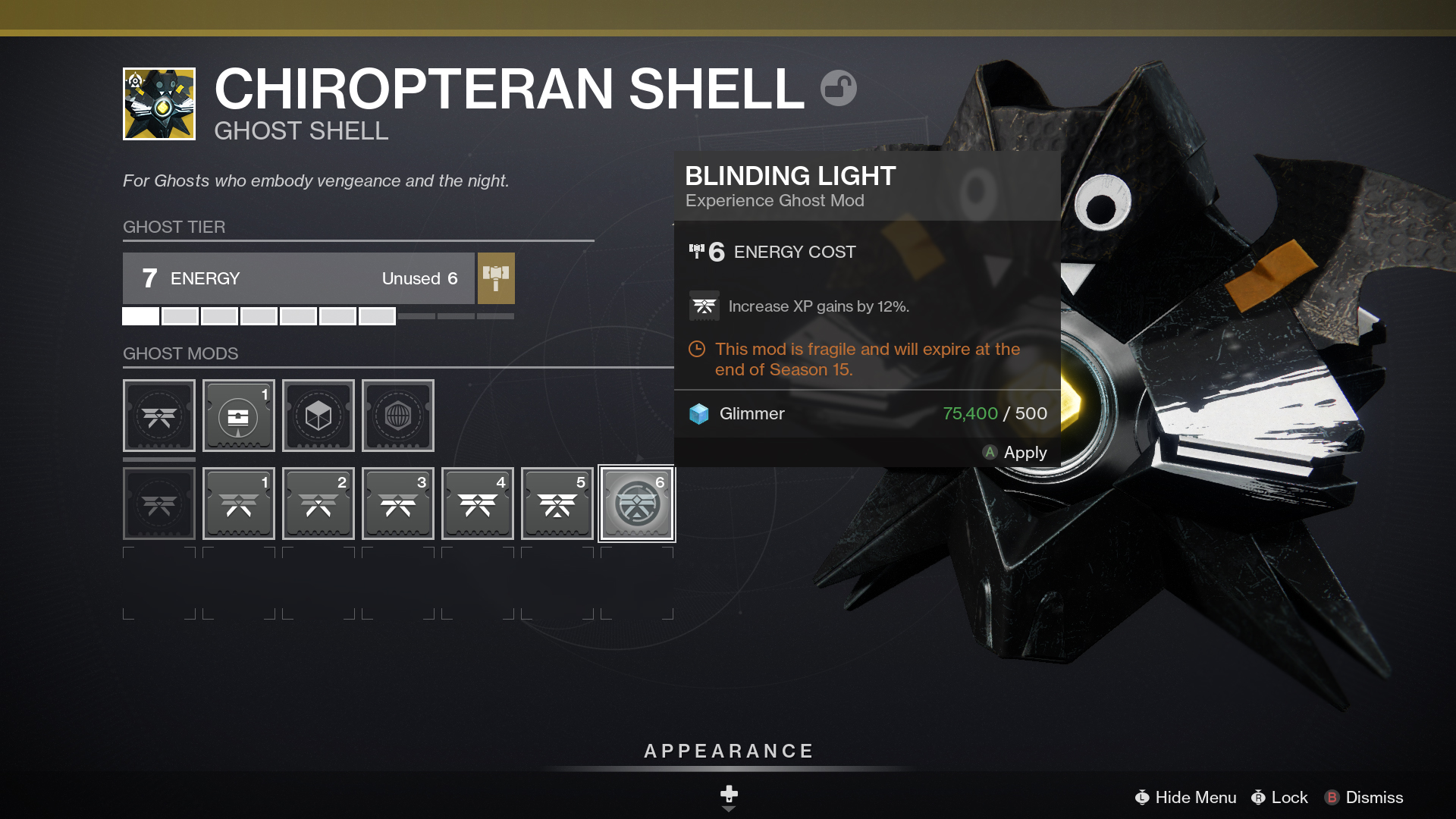 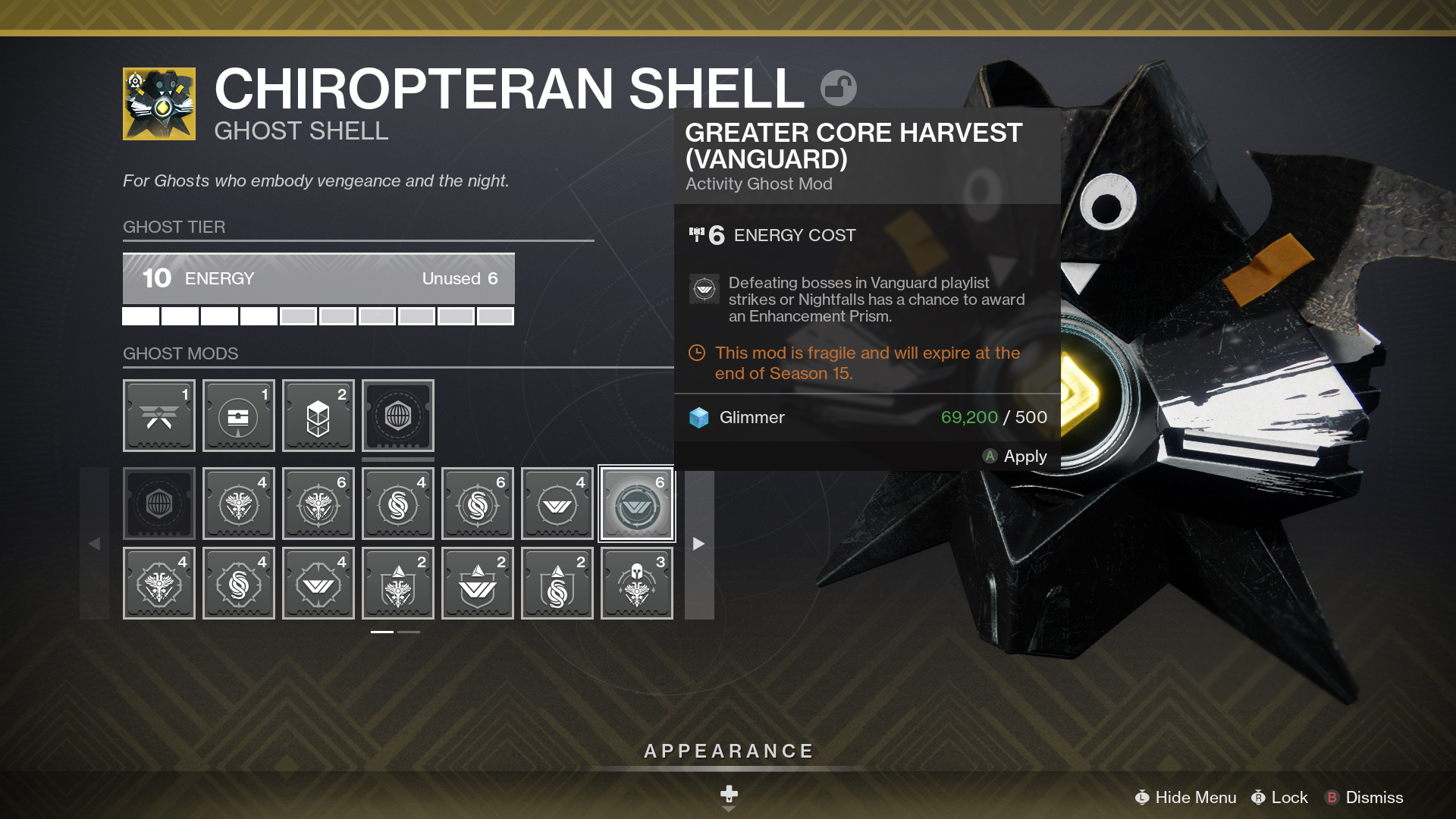 Smith’s Sentiment: This is a very welcome and long overdue change. Currently some great look Ghost shells are useless because the static perks on them suck. This isn’t quite on the level of just making Shells be ornaments, but it still a very nice change. Now we’ll be able to customzie our Ghost in fun ways and maybe have more than one be useful. I look forward to seeing what all mods are available and how much it will cost to Masterwork a Ghost.