The God of War Collection contains HD ports of what many consider to be amongst the best Playstation 2 games ever made: God of War and God of War II. Remastered in HD and with gameplay operating at 60 frames per second, the two PS2 classics are a must have for any PS3 gaming library whether you have them for PS2 or not.

The collection has been out for almost two years now, and I’ve had it for almost a year (and I never played the PS2 versions because I never bought a PS2; I was an Xbox guy back then) and finally got around to beating the second one after playing through the Origins demo and being reminded of just how awesome these games are.

Because this is a collection that is a couple of years old now, and is made up of even older games from the PS2, I’m going to do the review a little differently and it’ll probably be a little shorter than usual. You can pick this up right now, brand new, from Amazon for only $19.98… which is an absolute steal in my book. The collection is packed full of goodies. Both games and all of the bonus content from the originals (videos galore, challenge arenas, bonus attire, etc.) are all here. The videos, while entertaining, don’t necessarily look that great on an HDTV due to being in standard definition and compression has a lot of it really pixelated.

The gameplay is where it’s at though. I love both games, but probably enjoyed the second one a little more. It took everything good about the first one and expanded upon it in a big way. The HD graphics for the gameplay itself looks great, but the SD cutscenes look like crap (with the exception of the CG scenes which look pretty good). 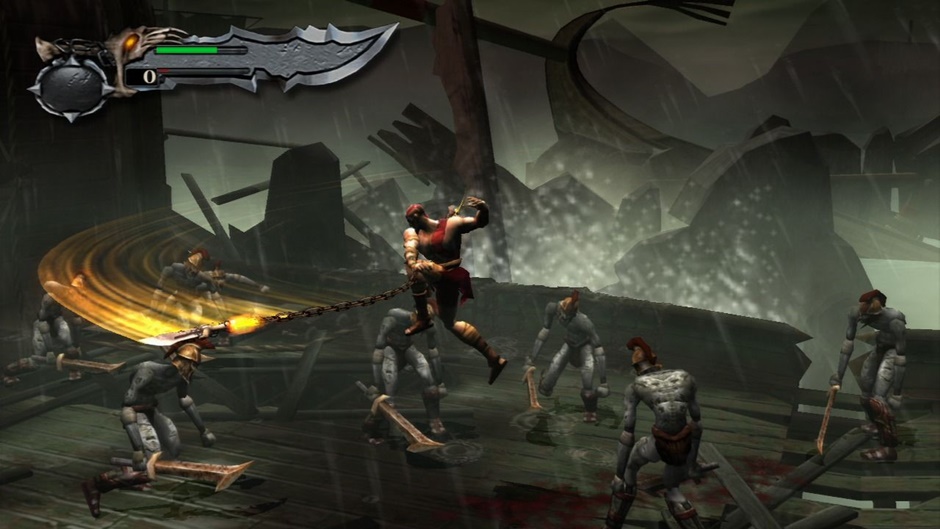 My only issue with both games is the wonky camera. I died A LOT throughout both games. I didn’t die because I suck at God of War and let the enemies kill me, I died because of the camera angles and some control issues. With the exception of some moments in Enslaved, I have never been so frustrated with camera angles as I was in God of War and to a lesser (but still way too prevalent) extent God of War II.

The collection is also packing PS3 trophies, and I have almost acquired all of them. They’re not particularly hard to get, but I will need to eventually play through both games again to attain 100% completion on both games (I think I’m like 88%, or two trophies away, on God of War).

After you finish the games (each between five and eleven hours, depending on how good you are), you can access Challenge of the Gods (God of War) and Challenge of the Titans (God of War II). These challenge arenas consist of 10 stages of varying difficulty in which you’ll need to complete a goal to advance. These challenges can be laughably easy, or insanely hard. I managed to go through Challenge of the Gods pretty fast, although there was some really hard stages there, but I can’t get past stage four on the Challenge of the Titans. It can be frustrating to the point of wanting to smash your controller, but at the same time it is kind of addicting so you just keep on retrying and retrying some more. I will eventually get it though.

If, for whatever reason, you have not yet grabbed this Playstation 3 Greatest Hits DualPack collection, then you should do so immediately. For $20 you can’t beat it, and if you don’t have the third one yet you can also grab it for $20 (I’ll have a full review of the third game in the coming months). This collection is a must have for any PS3 owner. While I’d give God of War an 8.5 and God of War 2 a 9, I’m going to bestow upon this collection a perfect score of 10 simply because of how enjoyable it is and for the price, it really does contain the value of an “Epic Masterpiece.”

God of War Collection gets a four out of five: GREAT.