Valhalla Hills is strategy/city-building game developed by Funatics that first released on Steam Early Access back in August 2015. On April 25, 2017 the game came to PS4 and Xbox One in the form of Valhalla Hills: Definitive Edition, which includes the based game and the two DLC packs (Sand of the Damned and Fire Mountains) plus an exclusive map type called The Dwarf Cave.

In Valhalla Hills you play as the Norse god Leko, the youngest son of Odin. Odin has exiled you, banished you down to Midgar because you’ve failed to meet his expectations. Now you’re going to have to work your way back to Asgard and you’re going to be helping some villagers get to Valhalla in the process.

That’s about as much story as you’re going to get. It’s just not meant to be a game with a story other than that very basic backdrop.

And before we go any further, not that this review is based on the console version (PS4 reviewed) only. I’ve never played the PC version.

Your goal here is to build up a village and reach a portal at the top of a mountain to go to the next map and do it again. As you do this, you’ll unlock stuff that’ll help you progress.

Couple of things that need to be stated up front. The tutorial is pretty poor; it simply doesn’t do a good enough job of explaining the game or telling you exactly what to do. Sometimes that might not necessarily be a huge problem, but it is when the controls are bad.

This game, and most in the genre to be fair, should be played on a PC. If you’re at all interested in this game, just get it on PC (the requirements aren’t high, a basic low end PC will run it). I’ve found the controls, combined with already not knowing what to do at the beginning, to be extremely frustrating. Save yourself the headache and play with a keyboard and mouse if you can.

Also, play the game on the fastest speed. There’s no need or reason to play on anything other than the fastest setting, because even that feels like it should’ve probably been the default normal speed. It’s just slow. If you’ve played a real time strategy game before, and particularly one of this type (say The Settlers series back in the day and yes some of the developers from The Settlers II worked on this game), you’ll be familiar with the basics (poor tutorial and controls aside). Send woodcutters out to cut trees and gather wood, harvesters for wheat and food, a toolmaker to make tools, and so on. Build roads to connect your buildings so that your villagers have a clear path to get where they need to be faster.

You build up a little army and make sure they’re supplied, and they’ll defend your village. You’ll need them once you’ve reached the end of the map, as the portal you need to go through will summon enemies to attack you and you’ll need an army to defeat them and protect the rest of your villages (unless you want to give up a sacrificial offering that gets increasingly more expensive).

By the time you’ve established a half way decent village though, you’ll probably find that you’re already at or close to the portal to get to the next map and start again. This makes it not really worth investing in trying to create and manage a good village unless you just don’t want to leave the map (and you don’t have to, there’s no real progression here). The only problem with that is the maps are pretty small. 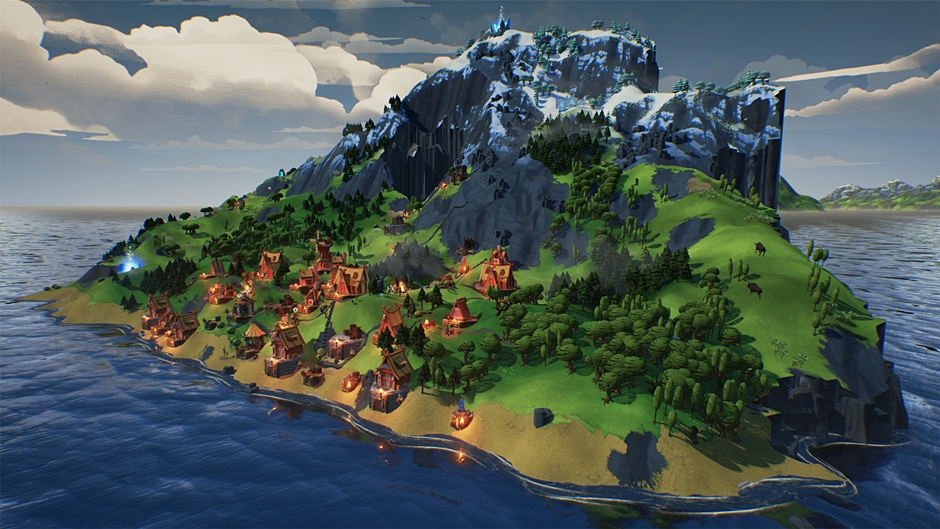 For those that just want to try to create and sustain a village and do some city building, you’ll likely find the map size somewhat problematic eventually. But importantly to hinder you, buildings are locked behind challenges that you’ll need to complete to unlock them. This makes a needless grind just to eventually be able to play the game how you might want to. And sadly, with the slow pace, you’ll likely become bored by the time you get a lot of those challenges done.

The game feels shallow, which doesn’t bode well with the slowness and the sloppy controls and camera. It’s priced at $40 and it’s just not worth it, even with the two DLC packs. It’s just not a fun game to sit down and play, and it should be. It’s more of a chore.

If you have the patience and can get into the game and understand it really well, then you could possibly have a blast. But that’s a very small group of people who’d be able to do that, and even then if that’s you then you’re likely a die hard fan of the genre which means you’ve got a lot better options than this available to you on PC.

Valhalla Hills Definitive Edition gets a two out of five: FORGETTABLE.

*A digital copy of this game was provided by the publisher for review.