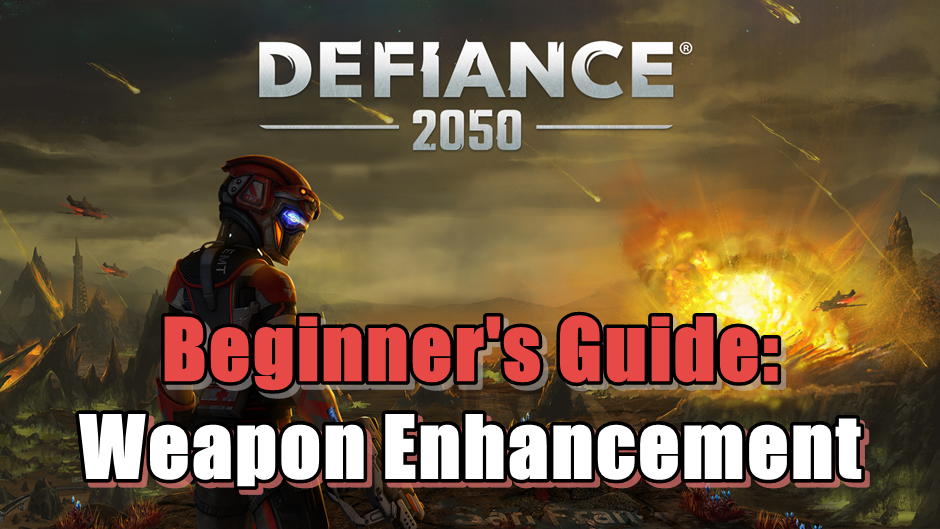 Defiance 2050 is the remastering/continuation of 2013’s Defiance. The original released on PS3, Xbox 360, and PC and is still available to play. Though it began as a pay-to-play game, Defiance transitioned to free-to-play in 2014. Defiance 2050 is likewise a completely free-to-play third person looter shooter MMO from Trion World’s, available now on PS4, Xbox One and PC.

There are some key differences between Defiance and Defiance 2050. One of the biggest is that EGO now acts as the more traditional level, capping at 50. Meanwhile, players become more powerful in the game by increasing their Power Rating, which caps at 5,000.

Your Power Rating is the average of the items you have equipped in your active load out. This includes your weapons, shield and your grenade. As your Power Rating increases, you’ll do more damage, have more health, and have better shield and armor values. It’ll also increase the power level of the enemies you encounter throughout the world.

This is a looter shooter, and that means your whole purpose of playing is to grind the content to get better weapons to drop and increase your Power Rating.

Increasing your Power Rating is relatively straight forward. As you play, you’ll get new guns and gear to drop from slain enemies and mission completions which will usually be at least a slight upgrade to your Power Rating. The items that drop for you have their Power Rating based on the average rating of the highest items that you’ve found so far. That would be the average of your two highest weapons, highest shield, and highest grenade. You do not have to have the highest power items equipped or even in your inventory; so you can safely sell or dismantle higher power gear without it negatively affecting your average.

To maximize your Power Rating gains though you’ll want to enhance the weapons that you get that you like. Enhancing the weapons will increase their Power Rating and unlock some additional bonuses. This can bump your power significantly, which in turns means the next drops you get will be even higher power.

To enhance a weapon, you need enhancement materials called Salvage.

Salvage drops from enemies; run over it and you’ll pick it up just like you would ammo. It is also rewarded from missions, side missions, and by dismantling unwanted weapons from the inventory screen or a Salvage Station. You can also buy Salvage with Bits (real money) if that’s your thing.

There are seven classes of weapon in Defiance 2050, each with different archetypes that aren’t important to the enhancing process.

These weapons come in different tiers of rarity; the better the rarity the better the weapon can be enhanced and the more materials it’ll cost to master enhance.

You’ll get Salvage for each type of weapon, and that Salvage will be Common or Uncommon (if there is a higher tier of salvage, I haven’t seen it).

If you have an Assault Rifle you like, you’ll want to use Assault Rifle Salvage. Note that you can put any type of Salvage into a weapon enhancement, you’ll just see the most benefits by using the same type. You can put common pistol salvage into a rare assault rifle, but it’s simply not going to be worth very much.

As you can see, using Uncommon Salvage will yield significantly faster results. If you use the same weapon type salvage as the weapon you’re enhancing, you’ll be getting a 3x bonus. So if you’re upgrading an SMG with Uncommon SMG Salvage, you’ll be getting 40 enhancement points per one piece of that salvage (the 10 points the salvage is worth, plus an additional 30 for the being the correct type). If you have 10 salvage, that is 400 points whereas if you used Uncommon Pistol Salvage in that SMG and had 10 of them, you’d only get 100 points.

If you know you’re not going to use Detonators, feel free to put the Salvage for those weapons into the weapons you like, because the 10 points for it (if Uncommon) will add up quickly. You don’t want to use all of your Sniper Salvage to upgrade your Assault Rifle if you know that you’re going to want to use a sniper.

Time for some picture examples: This is my secondary character using for low level purposes for this beginner’s guide. As you can see, the Power Rating of this character is 154.

The weapon I’ll be upgrading just a little is the XAR-37 Sovereign Von Bach, which is currently 168 Power (my highest power item). Here I have a 168 Power Uncommon Assault Rifle. I have only Common Salvage, and no Assault Salvage. It will take 4 Enhancement Points to take this gun to Rank 1.

I’m going to put every Salvage I have except for Detonator and Sniper into this AR.  That’s about 14 pieces of Salvage, each worth just one point. 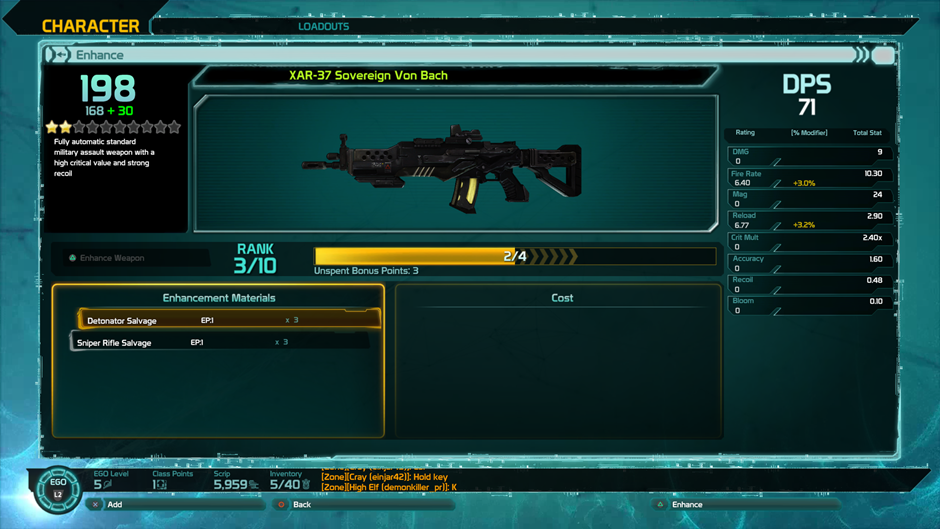 I was able to get this AR up to Rank 3, and could’ve easily hit rank 4 with just two of the salvage I still I had left. This bumped the Power of the gun from 168 to 198.

Raising the Power Rating up an additional 30 bumped my character’s power up just a little. 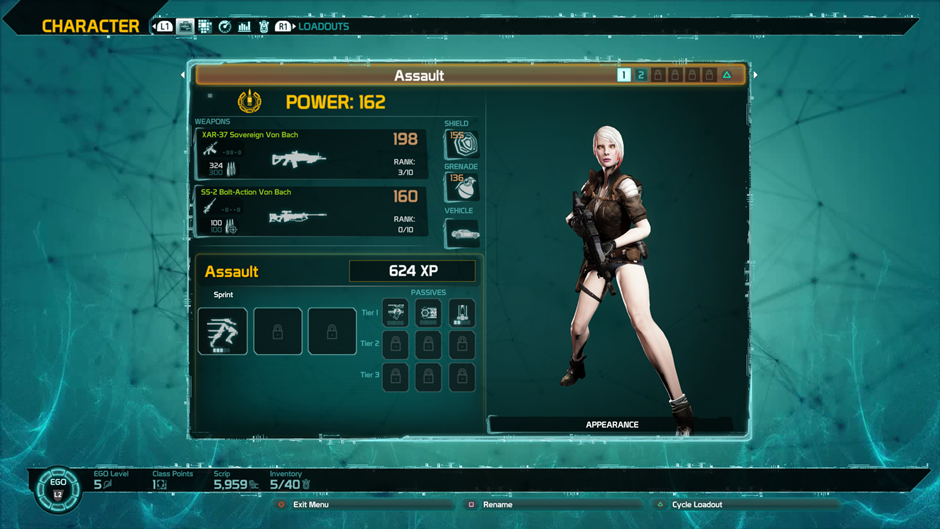 She went from 154 Power to 162 Power. Not huge, but easy because that common salvage isn’t going to be much help on rare or higher weapons.

I still have six Salvage left though, and I know you’re wondering what sense it made to enhance the already higher power weapon than the lower power sniper. So let’s upgrade that from it’s base of 160, using the sniper and detonator salvage that we still have left over. I put six salvage into this sniper, three of which was sniper salvage. Because I was putting sniper salvage into a sniper, the enhancement points get the +3 bonus. So one salvage piece was worth four points instead of one. These three pieces of salvage were worth 12 points total, just about equaling the number of points we got out of 14 pieces of salvage put into the AR.

This bumped the sniper up to rank 3, and raised the Power to 190. 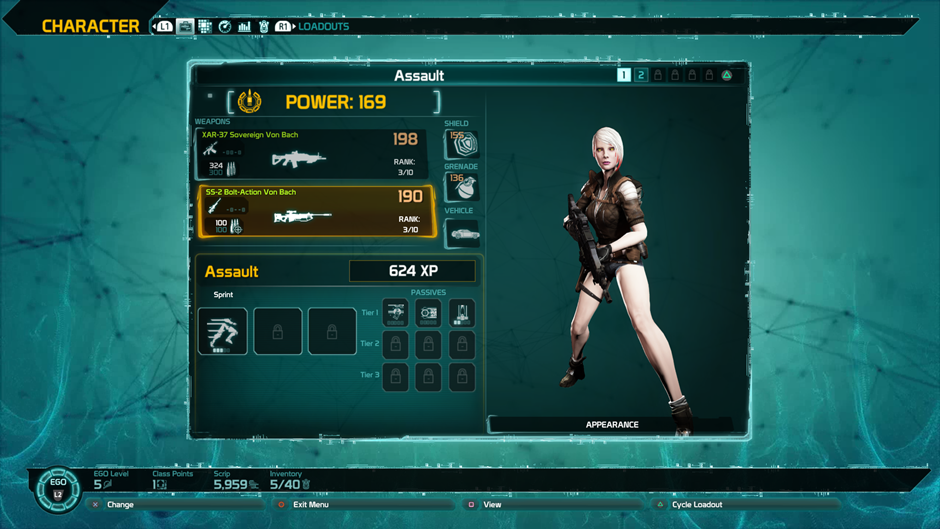 Spending a little salvage on guns this character will likely use for a little bit, bumped the Power up from 154 to 169. It increased our average, which will make the next drops this character receives higher, which will result in a nicer bump once a grenade drops since it’ll be a lot higher than the 136 she has equipped now.

Here’s two more pictures, showing a rare weapon that had been enhanced to rank 4, and then using uncommon salvage of the same weapon type to rank it up to rank 8. This’ll give you a sense of how much salvage you need to rank up rares and higher and why common salvage won’t be all that useful on them. 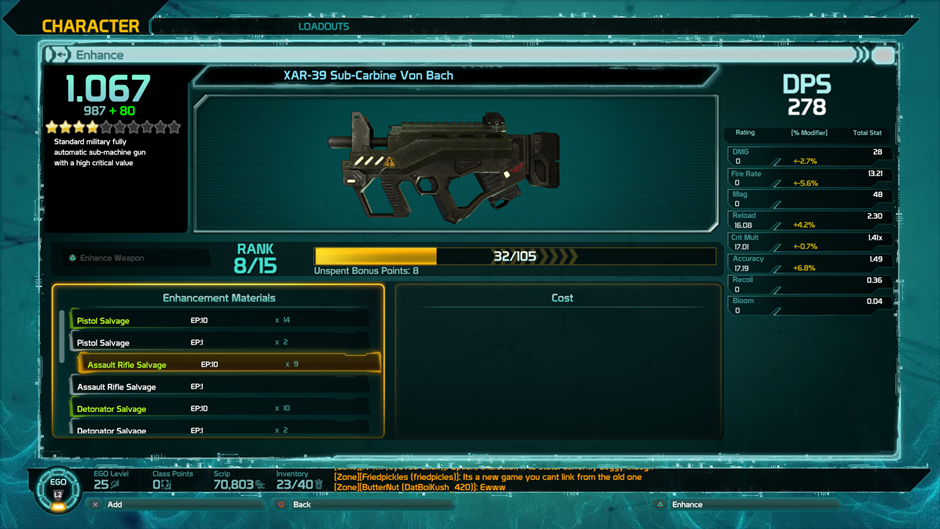 That 400 points took us from rank four to eight. 105 points are needed just to hit rank nine. You can see the steep climb upwards.

Always be enhancing as you play. Don’t sell your weapons, break them down for salvage. Enhance your weapons as frequently as you can; stockpiling common salvage isn’t going to help you once you start getting rares and higher to drop.

You can’t sell Salvage, and thankfully it doesn’t take up any inventory space. There’s also no cap to it.

As you enhance your weapons, they’ll move their enhancement rank (or Mastery Rank if you prefer to call it that, and I do). Uncommon weapons are capped at 10 ranks, rares at 15, epics at 20, and legendary and prototypes cap out at 25 ranks.

Each rank adds +10 to the Power Rating. If you fully enhance a 250 Power Uncommon weapon, it’s new power rating will be 350.

As you enhance your weapon and earn new ranks with it, you’ll acquire Unspent Bonus Points. You can spend these bonus points to increase Modify Bonuses on the weapon. If your weapon rolled with +17.19 Accuracy, +17.01 Critical Multipler, and +16.08 Reload you could spend your bonus points (say you have 10) to increase those modifiers. You can pump all of your points into one stat, although with diminishing returns, or you can spread them out however you want.  You can reset these bonus ranks if you so choice, and you can also reroll one of your modifier bonuses.

Rerolling a modifier will cost a little Scrip and a Caeruleum Core, and also lock that stat so that you can’t reroll one of the other two default modifiers on the gun.

You can also add mods to a gun, but we’ll save that for a future guide.

That’s going to wrap up our Beginner’s Guide to Weapon Enhancement in Defiance 2050. Hopefully you find this useful, but if you have any questions the comments are open so feel free to ask.