Beyond and Season of the Hunt have brought forth over 30 new or reprised weapons.

Over the coming weeks, we’ll be reviewing some of these and posting these “God Roll” guides.

Note that “God Roll” is subjective. What one considers a god roll might not be what another player would; playstyle and intended activity usage would play a roll in that.

Some of our guides this season will be aimed towards PvP rolls, while others will be geared for PvE. In either instance, we’ll try to spotlight a version that might be good for the other activity as well. Sometimes the “god roll” would be the same for both PvE and PvP.

These guides are aimed more at console players, or controller users. Not saying that they wouldn’t be good on PC too, but that’s not a platform I play and the game handles differently on PC than it does console.

This God Roll Guide is focused on PvE usage for the new fusion rifle Coriolis Force. 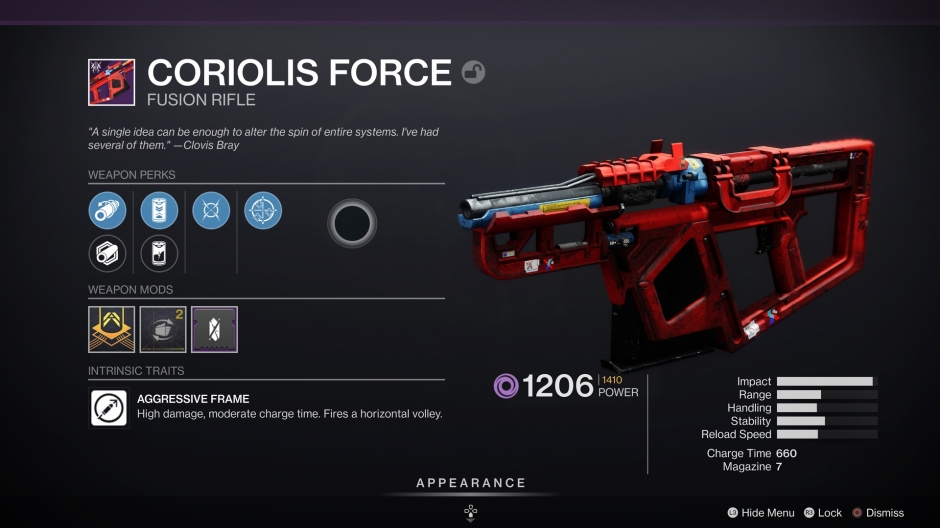 It can drop randomly from activities on Europa (such as defeating a High Value Target, from the chest after defeating the Strange Signal boss, etc.)

You can also farm Coriolis Force specifically by completing The Technocrat Empire Hunt on a week where it is available, but keep in mind that it will cost Herealways Piece each time you do the Hunt.

Here are the base stats for Coriolis Force:

Here’s the thing about Coriolis Force that sets it apart from other high impact fusions.

Coriolis Force is high impact, but it is not a High Impact Frame. It’s actually a wholly unique, brand new archetype of fusion rifles: Aggressive Frame.

It has high damage with a moderate charge time. And it fires a horizontal volley of bolts. That means it’s not a random spread, it’s a predictable and constant almost straight horizontal line.

The closer you are, the tighter that horizontal grouping. The further back, the more distance that separates the bolts. Regardless of activity type, this fusion rifle isn’t going to map people. It’s close range, and mostly suited for PvE.

Here’s my PvE god roll and the roll I will be hunting for:

In the graphic above, top selections are my preferred picks, bottom perks are suitable alternatives.

Top is my god roll, the one I want, but I would be okay with a completely bottom roll or any combination of it.

One For All is a brand new perk added in Beyond Light, and synergizes well with Feeding Frenzy.

Once you hit three different enemies, you get 9 seconds of 33% more damage.

When you’re at a boss, you can kill two read bars, hit the boss one time, reload while feeding frenzy is still active and then hit the boss as many times as you can in the eight seconds you probably have remaining.

You could rock a Backup Mag to up the mag from 6 to 7, but given you have a charge time and 9 seconds of the damage boost, I’d recommend giving up that one extra shot and rocking a Boss Spec instead.

Thresh is another new perk, and you just get a little bit more Super energy for a kill than you would otherwise get without it. So if you’re rocking a high intellect build and you’re using a high DPS super with a sword or grenade launcher for boss damage, a Coriolis Force with Thresh to kill minors and majors would help get the super faster.

The roll I have right now is the one you see in the image above. I have two of the perks I want; Liquid Coils and One For All. I will be farming for my god roll later, but for now I’m happy with this one and I’m saving my Herealways Piece for unlocking Sabotage perks at Variks.

Moving Target isn’t a bad perk by any means, so the one I have right now is already pretty solid. It has quickly become one of my favorite weapons to use and it deals great damage to majors and ultras. Of course will chew right through red bars.

Because of the spread, it’s great for bigger enemies like knights, minotaurs, servitors, bosses, and the new enemy types Brigs and Wyverns.

This is not a fusion rifle for PvP though, as you’ll pretty much be in almost shotgun range to consistently get a kill. If you’re at medium range, good luck securing a kill. As such, I won’t even include a PvP roll.

Head to Europa, kill some HVT’s or do The Technocrat and get yourself a Coriolis Force because right now it’s one of the better new legendary weapons added in the game and is a tremendous damage dealer especially with One For All.

We have loads more Destiny 2 guides and weapon roll guides already on the site and more coming soon. Subscribe to the site for free to receive notifications of new posts via email, or follow us on Twitter to stay up-to-date on all things Destiny 2.